Alfred Hitchcock behind the camera directing a scene from Notorious.

Alfred Hitchcock’s “icy blondes” have become synonymous with his style of storytelling. But a focus on those characters is limiting of the kind of creator he was because you ignore an era of his filmmaking that features a slew of strong, confident women possessing a different hair color: the brunettes. The 1940’s brunettes weren’t dogs or fragile women; they were beautiful badasses. But one of these actresses stood far above the rest: Ingrid Bergman.

When Ingrid Bergman arrived in America in 1939 she had already been a leading actress in her home country of Sweden. Studio executives hoped to “white-wash” her by changing her appearance and name but Ingrid rejected their ideas and threatened to go back home. The execs had a change of heart and began production of an American remake of the Swedish film she starred in titled, Intermezzo.

The film was a huge success turning Ingrid into a star. Audiences were drawn to her delicate, natural features but that posed a problem for Hollywood. Ingrid was a simple beauty, a stark contrast to the glamorous, manufactured looks of the Lana Turners, Ava Gardners, and Rita Hayworths of her day. Her features relegated her to portraying saintly characters which she found boring. She fought to portray the “bad” girl in the 1941 film adaptation of Dr. Jekyll and Mr. Hyde (coincidentally opposite Lana Turner in the “good” girl role) and succeeded. Her transformation was so good audiences didn’t even recognize her. Ingrid went on to do Casablanca and For Whom the Bell Tolls but I feel like she reached another level of acting in 1945 when she was cast in a film with Alfred Hitchcock at the helm.

The two would make three films together beginning with Spellbound. Spellbound is one of the first pictures to address psychoanalysis. It’s a thriller but it’s not one of Hitchcock’s well-known features partly due to its plagued production. It was released by Selznick International Pictures and tyrant producer David O. Selznick had a heavy influence on the finished product. Ingrid’s performance saved the day. Her character is a fierce, independent nurse trying to piece together the mystery behind the new doctor (Gregory Peck) at the institution where she works. The difficult shoot resulted in what many consider an uneven picture but it ignited a lifelong friendship between her and Mr. Hitchcock. 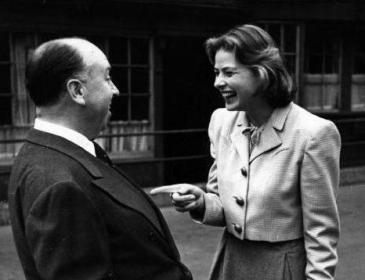 “His humour and his sharp wit is a delight. He likes, I think, very real people. If someone on the set was a phoney he was liable to start a sort of double-talk, which sounded like absolutely normal conversation but turned out to be nonsense. That is how he got rid of visitors.

The next year the two would reunite for the masterpiece Notorious. To me, this is Ingrid’s best role. Alicia Hubermann is a promiscuous woman living life on her own terms going so far as to infiltrate a group of Nazi spies. She is in touch with her own sexuality, unashamed of her “loose” past. Throughout the film Alicia Hubermann does whatever the heck she wants, she’s in complete control of her own destiny. This character is a total badass. She gets to run around with Cary Grant and the two share one of the hottest and longest kisses in screen history. Bad ass.

Cary Grant, Bergman, and Hitchcock on the set of Notorious

Grant and Bergman also became lifelong friends and would reunite years later for another film, Indiscreet, in 1958. In many respects (minus the whole Nazi element) Ingrid Bergman herself was very much like Alicia Hubermann. Her desire to do things her way found her embroiled in an international scandal. Ingrid had an affair with Italian director Roberto Rossellini during the production of Stromboli in 1950. Both were married to other people at the time and she became pregnant. It was a far cry from the saintly image the public was used to seeing onscreen. The public outcry was so widespread that she was denounced on the floor of the U.S. Senate and Ed Sullivan banned her from being a guest on his show. Ingrid Bergman possessed the same kind of independent qualities when it came to her own personal life like Alicia Hubermann which is what made Hitchcock respect her. There’s been disputes as to whether or not Hitchcock’s affection for Ingrid went far beyond her as an actress but you can Google and read those for yourself. Ingrid became the director’s muse and helped usher in a new kind of female lead in his films. Unlike the characters portrayed by Joan Fontaine earlier in Rebecca and Suspicion; Alicia Hubermann used men, they didn’t use her. Alicia Hubermann was calling the shots. Alicia Hubermann put herself in danger. 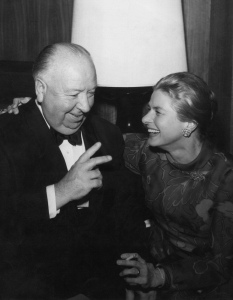 The admiration was deep. She wasn’t just a collaborator, there was a connection that transcended beyond the scripts and soundstages of Hollywood. The two bonded over their expat status (Hitchcock from London) and their disdain for the superficial aspects of the film industry, When you compare the Bergman/Hitchcock films to others in her body of work, you can see there was a significant influence on her performances. Many of the characters Ingrid portrayed during her career were independent but through Hitchcock’s lens they presented a striking maturity and brash attitude that made them women you wouldn’t want to mess with. These women may have had moments where they turned into damsels in distress but they put themselves in those positions and subsequently found ways out of them.

While the two collaborated on three films in the 1940’s, their mutual respect and friendship lasted until Hitchcock’s death in 1980. Below is a clip of the American Film Institute’s tribute to Hitchcock where Ingrid pays tribute. It’s a sweet clip capturing her fondness for him. After watching this clip, please go do yourself a favor and get your hands on either Spellbound, Notorious, or Under Capricorn to relish in the bad-assery of Ingrid Bergman under the direction of Alfred Hitchcock.

13 thoughts on “Ingrid Bergman under the direction of Alfred Hitchcock”